Here's a playful post to set the tone for my recent exhibit of ceramic and mixed media sculpture at RedSky Gallery in Charlotte, NC. I titled the collection "Recapturing Childhood," and in it I explore children's imagination, play, and many stories that children and adults have traditionally shared. 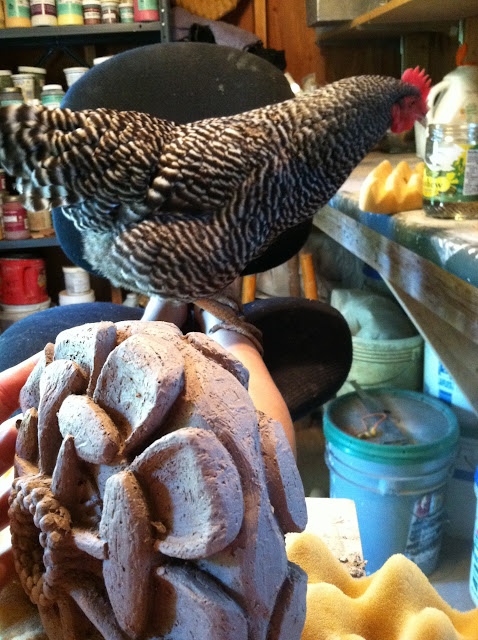 The Chickens and I worked hard this summer. Here Froggy helps me carve a wheel for a fierce wild caracal cat, wheel that wound up looking like this: 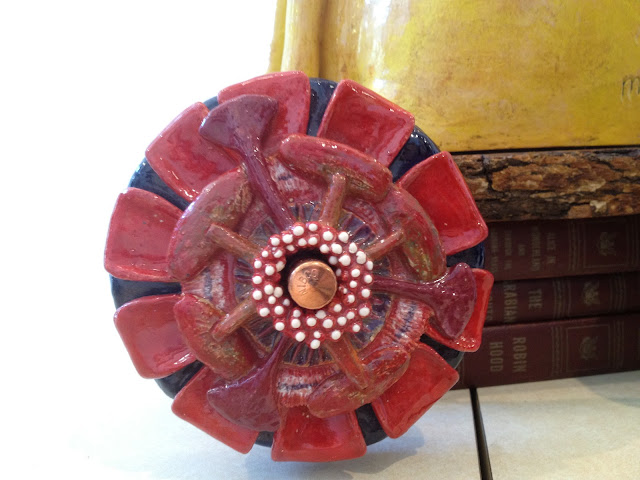 The wheels add to the lie of the Caracal... for this small wild cat looks, and often acts, so charming toward humans, just like the passionvine that modeled for this wheel looks and acts so sweet, just before it winds around your whole garden and chokes any tamer species into submission. I carved stories all over the caracal, some of them true and some of them exaggerated, to work to capture the way various observers classify this fierce kitty kat. 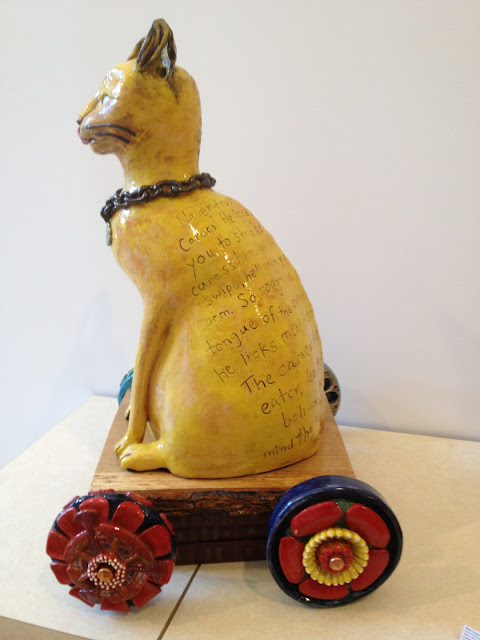 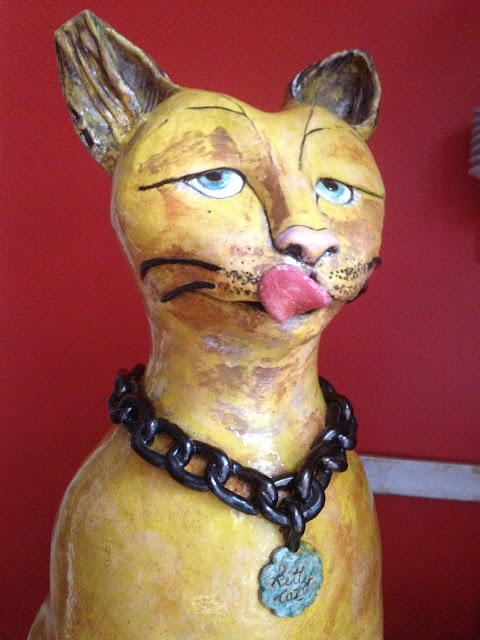 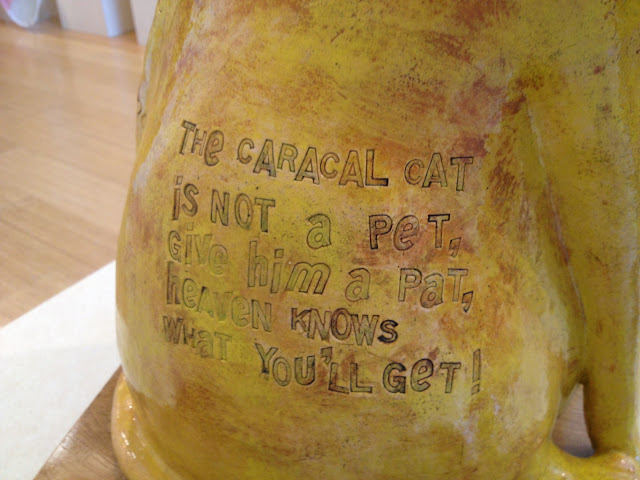 After all that work, the chickens, dogs and my amazingly willing tribe of helpers and I were ready to pack the fancy new crates and head to the show. I even scrubbed the clay and glaze out from under my fingernails. 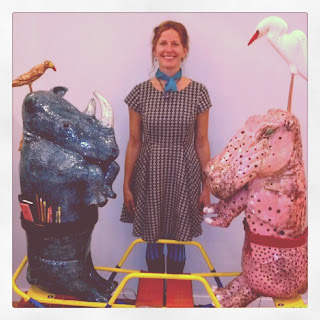 Brother Rabbit seemed to capture everyone's heart at the opening, 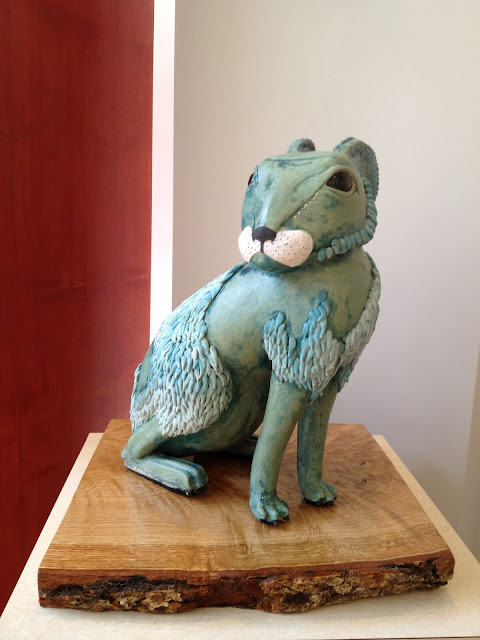 and maybe I should bet on the Derby next year, because I predicted he would be the first one to cross the tapes, and, in fact, he sold fast and was the first pet Roman and I bid goodbye. 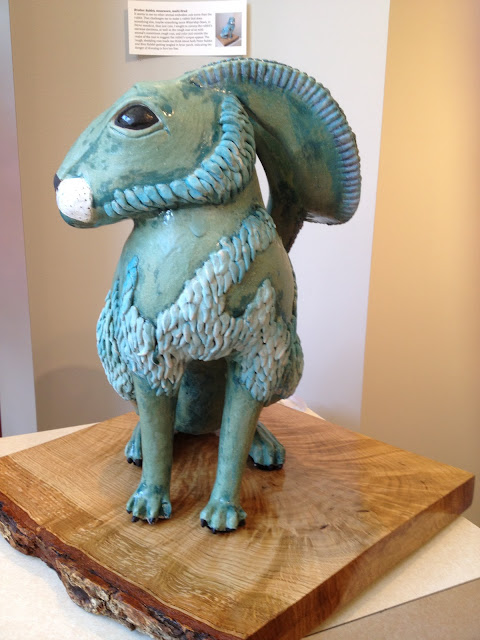 No briar patch or garden fence gonna snag this rabbit's coat... all we can see is his back 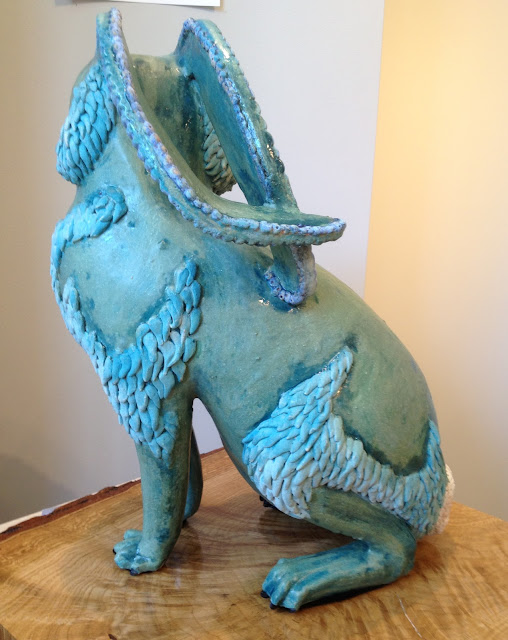 as he heads out the gallery door.

The Llama hasn't sold yet, and I think Roman and his friends may be glad. Measured in children's years, this camelid has lived with them a big chunk of a lifetime. The llama carries classic stories that have in turn accompanied me for all of my lifetime, stories that, after travelling to their shores again and again, informed this show. 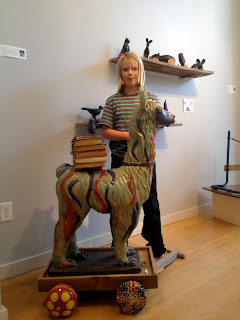 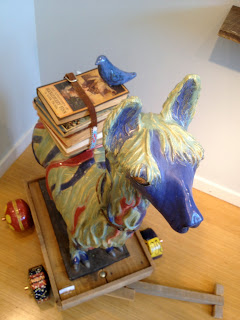 I didn't have a llama to carry the hippo and rhino's story around. It's been writing itself inside me since the early 90's when I visited their territory in Kenya and Tanzania, and found myself captivated by their similarities and differences. 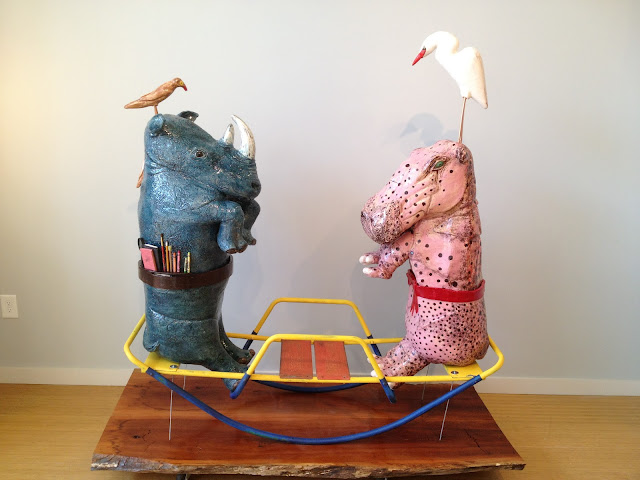 I loved having a pack of kids at the opening... even though I and the other parents experienced small heart palpitations about potential calamity to ceramic, oil, or glass as they made the gallery their own. I love it that the kiddos think these pieces belong to them, because, certainly, I made them for kids as much as for grown ups. Kellie Scott, owner of beautiful RedSky Gallery, set up an fantasy-worthy opening spread of candy corn, cracker jack, m&m's and more childhood taste sensations. I felt in spectacular company, as one of my favorite artists, Joseph Cornell, offered a kid-food spread at his last show. 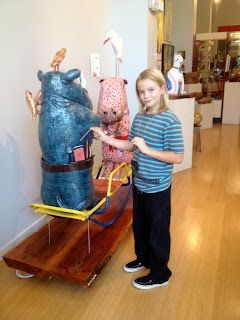 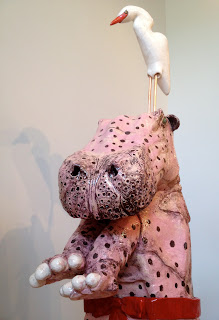 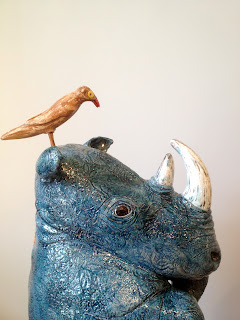 I love the slow-time of working with clay. As a piece grows, I have time to mull over small decisions and revisions. Because I have balanced the hippo and rhino see-saw in my mind for years (I've thought about this piece since seeing Dürer's Rhino and travelling in Africa as a wide-eyed undergraduate) I've puzzled through many of the challenges in drawings and small maquettes. But I hadn't thought through the final surfaces, thinking I'd go fairly realistic like I had with the God Dog from Garden of Earthly Delights earlier this summer. I wanted to emphasize the subtle feminine/masculine play that I see with these two beasts, though, and somehow the ribbon and pirate belt weren't quite enough. Somewhere back in my memory I remembered an albino hippo, but when I looked it up, I found pink hippos! Hippos can get a different pigmentation condition called Leucism, just like humans and pigeons and lions. In hippos, it results in spotty pink skin which, though a bit adorable, is not so happy if you live in a sun-soaked climate. You can see some sun-burn on my hippo, too. I wanted to keep the boy/girl, blue/pink classification subtle, so I patted lace all over the rhino so he could remain in touch with his sensitive side. I hear rhinos are very sensitive. 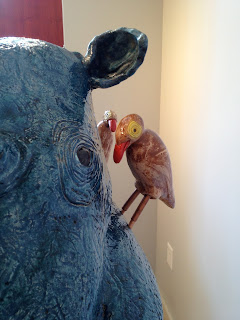 I couldn't find a blue rhino I liked, but this Ancient Egyptian blue hippo has always inspired me... and Dürer's Rhino has never left the front of my mind since I first saw it in the pink 80's.

you can visit the hippo at the Met and Dürer's Rhino at the British Museum. 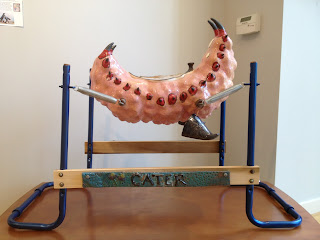 is probably the only other pink sculpture I've made besides the hippo!
My favorite part of the saddleback is the stirrups, which were the last part to metamorphose. I based them on antique Chinese stirrups and carved them with saddleback caterpillar moths. 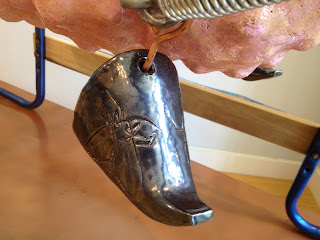 I went through a phase when everyone who saw my work wanted a cat. I thought I'd get sick of cats, but, instead, they came to equal a blank canvas, ready to carry most any material, narrative, feeling I asked them to. This particular cat let me experiment with majolica glazes and to express a kind of smugness which does seem to be one of the cat's particular defenses. 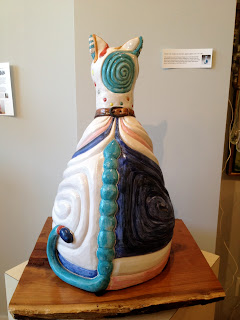 In the rabbits and the birds, I think I came closest to achieving one of my goals for this collection of work. I wanted to begin to explore the essential qualities of certain animals-- and people, too. Each morning when I wake up, I watch grackles poke around in my back yard before I let the chickens out. Grackles are so specific in their interest: they might look up, or straight ahead, or to the left... but you can't really see the movements in between. I love the ferocity of their gaze. I tried to just  capture that. The first person I showed this photo to said, "They are grackles, right," and of course I was thrilled. These simple forms, I hope, capture some essential 'grackle-ness'. I think my next body of work may seek out an intentional essentialism of animal (and maybe human) representation. 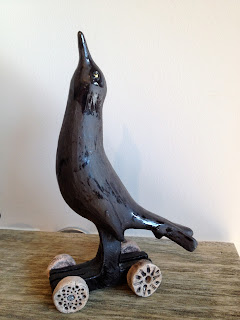 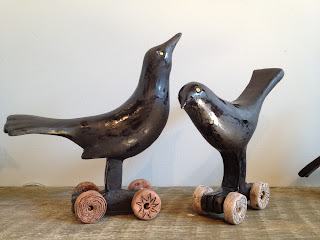 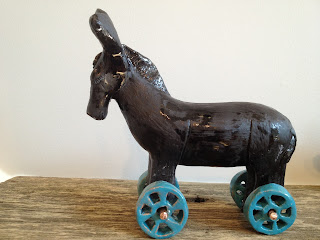 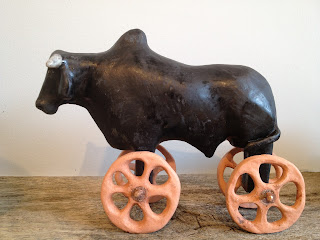 A few recent books have explored the deep history of the deceptively simple rhymes we start our children on... nursery rhymes, mother goose. Many have rich historical source material, pretty much all have great sounds and images. I will be engaging with nursery rhymes again and again, as I do in these reliefs (how fun to nest tiny clay objects in right sized boxes) and in the rhyme carved on the Alphabet horse. 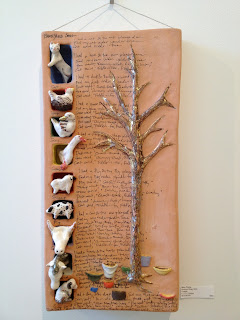 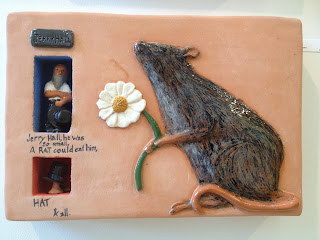 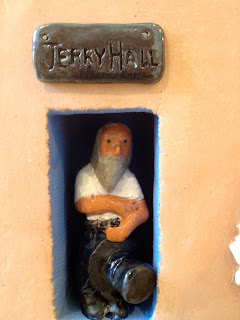 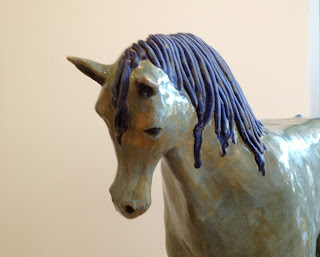 The rhyme from the alphabet cart:
I had a little hobby horse
And it was dapple gray
Its head was made of pea-straw Its tail was made of hay....
I saddled him and bridled him And rode him up to town,
There came a little puff of wind And blew him up and down. 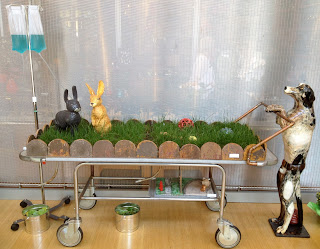 The Garden of Earthly Delights, Stoneware and mixed media, 8' x 6'
Like the horse cart, this piece gathers materials from many sources. This piece illustrates how I often accumulate a series of stories, objects, ideas or sources around a seed idea and develop them until they form a sculpture. In this case, I started with the image of a dog (call him Tater!) who loved to perch his feet on the high rail of a deck overlooking an unreachable Eden: a poplar woodland filled with jumping squirrels and alert rabbits. His bipedal stance stuck with me as interestingly anthropomorphic, and I photographed him in the pose, envisioning what he would dream about that night. But that was just the start. Then, 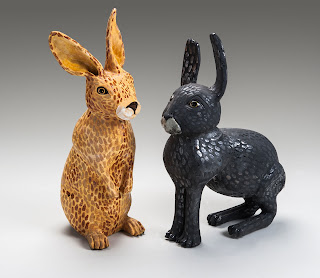 bunnies from heaven in the Garden of Earthly Delights